Excerpted from my WIP THE RULES – MARSHALL:

Sparsely decorated for plenty of open space, the room consisted of a white leather sofa, two easels with Vermeer’s ‘Procuress‘ and Leighton’s ‘The Fisherman and The Syren‘, and two busts of de Sade’s infamous heroines, Justine and Juliette.

While this little blurb seems utilitarian on the surface, there’s a bit more going on underneath. Here’s an opportunity to talk a bit about the craft of writing. Pull up a chair…

First, some context. Earlier in the story, the MC and an interior designer friend made the selections of the furniture, paintings and busts together. The sentence seems to be describing the room, and it does, but it’s also finishing up an earlier thread: the crates that the busts were packed in were a McGuffin of sorts. The reader is now learning what was in them. 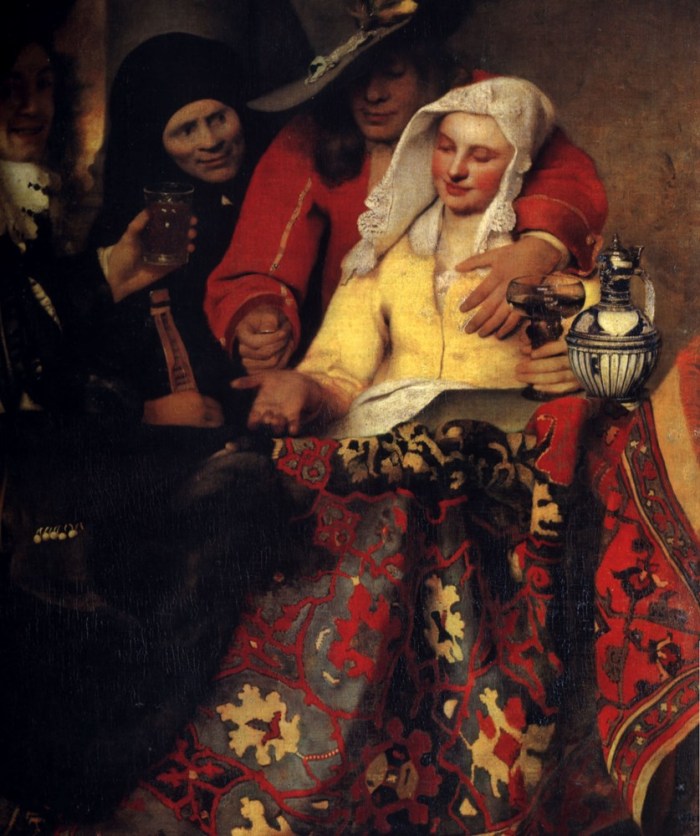 So I know I have their attention.
The rest of it is ostensibly exposition, but I’m also teaching the reader something about the MC, through his design choices.
He is detail-minded.
He didn’t just pick two random paintings off the shelf at Home Decor Depot. He picked those two specifically; which, as it turns out, are analogs for two other scenes in the book. It doesn’t matter if the reader is familiar with them, the analog is just an Easter Egg. That he was specific, discerning, and has art knowledge is enough.
He is a kinky feminist.
The busts tell the reader that a) he’s familiar with the Marquis de Sade books Justine and Juliette, and b) chose the characters, not the author. This ties in to the feminist theme of the book. The male author, widely criticized for his “treatment” of his characters (or at least, the philosophy under which he does so), has been excluded from the decor, in favor of his iconic female creations instead. Knowing that our MC is a kinkster, this serves to inform us as to where his limits lie.
He needs breathing room.
Here I lean on the psychology of aesthetics. He lives uncluttered, open space, which, knowing that he’s a bit of a drifter, makes sense. It allows him freedom to move unhindered. Moreso, he wants his environment clean and organized. Easier to control. Which, for somebody who feels out of control, is an subconscious way of establishing mastery of one’s domain; controlling what things you can.
Thus our MC is:
Not bad for a bit of expo, no?
This is one method of using otherwise prosaic exposition to your advantage, while at the same time avoiding info dumps. Note, though, that while analogs are wonderful tools, they tend to be a bit subtle. In itself, this sentence will not teach all these things to the reader. The key is to repeat them, in case one hint gets missed, the other fills in, or serves to bolster whatever notion it’s supporting.
To wit: Earlier in the book, the MC folds his laundry, rather than just drop it in a hamper. Couple that tidbit with his uncluttered design preference, and we start to get the feeling that he’s meticulous, perhaps a bit neurotic.
Later, he ruminates on the characters of Justine and Juliette, comparing their respective personalities; one is a suffering puritan, the other a free-living and sadistic individualist. In doing so, he realizes that he enjoys faceted partners, interesting, even if flawed, people.
The other ideas are repeated as well, so that by the end of the story (if I’ve executed well), my readers should be able to tell you all these things about the MC, even though I haven’t said anywhere in the book that he’s neurotic and meticulous.
This adheres to two imperative writing rules:
Now, don’t you want to read the rest to find out what happens to our peculiar character?
(NOTE: Although, now that I read the sentence here, it seems clumsy. It’s tweaked a bit for posting, but still clearly needs some polish. Expo should glide along smoothly, and this has a few potholes. Hopefully good enough to enjoy our little lesson.)
Cheers. 🌷
— Unpublished material ©2017 John Pendleton
Read more about THE RULES – MARSHALL

The official THE RULES - MARSHALL playlist.